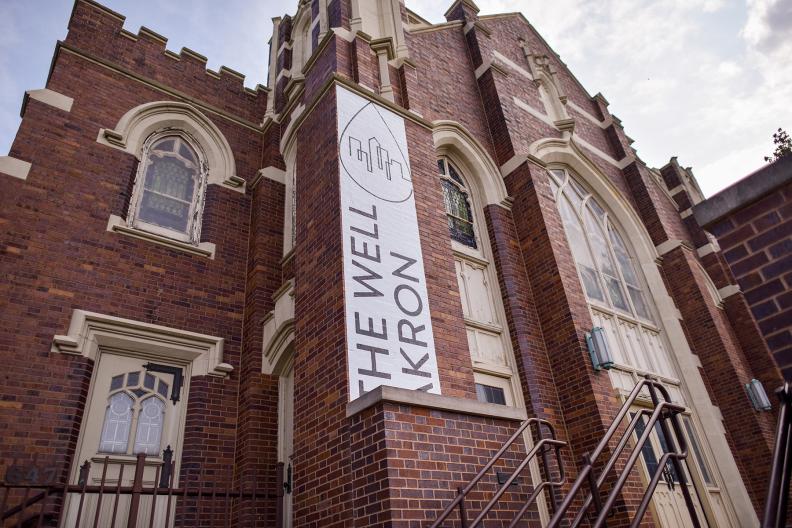 Zac Kohl pointed to a vacant lot behind the 114-year-old Presbyterian Church his community development organization bought in 2016. The empty land between two houses is too narrow to build on, according to zoning rules that stand in the way of progress.

Across from the repurposed church at 647 E. Market St., construction crews are replacing a demoed Chase Bank with another building that looks to be marooned from the sidewalk by a parking lot. Storefronts closer to the street encourage more foot traffic, Kohl said.

He and his partners in community development, which include the city, say Market Street is too wide at 64 feet across. It’s dangerous to cross on foot with no on-street parking or bike lanes, which promote business and connect people and places.

As a local resident and the director of the Well Community Development Corp., Kohl hired a consultancy firm in May to collect ideas like these from 200 neighbors. At City Hall and Family of Faith United Methodist Church this week, the public got a first look at what’s become the Middlebury Neighborhood Plan, a blueprint for a more connected community.

The multifaceted plan calls for new zoning. More noticeable suggestions include murals, arched lighting and landscaping the bridges over state Route 8 to create welcoming gateways into Middlebury, or installing trails and platforms that overlook the Little Cuyahoga River, a hidden gem that industrialists used in the founding of Middlebury as the manufacturing hub that built Akron.

The plan connects public and private projects already underway, offering Middlebury up as more than just a place to drive by.

A setting to develop

Middlebury’s 2,700 homes are the second cheapest in Akron’s 24 neighborhoods, just behind nearby University Park. At 70 percent, no other Akron community has a greater share of homes built before 1940.

Values suffer from the city’s No. 2 vacancy rate and No. 6 rental rate. Middlebury’s 5,405 residents — statistically some of the city’s youngest, poorest and least educated — live in a broken housing market. Risk-averse lenders, blight and unemployment block neighborhood-stabilizing home ownership. Without living-wage jobs and a mortgage, families struggle to build equity.

Facing these challenges, Middlebury formed one of Akron’s few community development corporations guiding local development from the bottom up. A group of business, nonprofit, church and community leaders called the Neighborhood Network, which fills a void left by the failed University Park Alliance, met in February to lay a sober foundation for the plan unveiled this week. Attendees grappled with Middlebury’s problems and solutions, its deficits and assets, how to respect the past and plan for shared prosperity by helping those with the least.

• Older than Akron and centrally located, Middlebury has no center. The plan identifies the high-traffic nexus of Arlington, Exchange and Market streets.

• Middlebury is working class without enough jobs. At a rate nearly double the city, 46 percent of households live on less than $20,000 annually.

• The University of Akron, Summa’s Akron City Hospital and other anchor institutions do not anchor their wealth or workers in this drive-through community.

• 75 percent of property belongs to people who don’t live in Middlebury.

At the moment, the housing market discourages lending or investing. Kohl’s agency keeps buying and fixing homes to sell to responsible owners. On track to buy and sell 60 housing units in 60 months, the Well CDC is building a critical mass of ownership, forcing landlords to keep rents reasonable while maintaining their properties.

Mission-driven, Kohl waits for the day when “the market and moral imperative overlap.” He’s put his money where his mouth is, personally investing $60,000 in one home later appraised at $36,000.

To put meat back on those bones, Julien is asking the city for more flexible zoning. He said building rules should differ from nearby Ellet, a community developed decades later with newer homes and more distinct commercial and residential areas.

The plan bets an economic future on the adaptive reuse of old factories, churches and office spaces, and the liberal commingling of businesses and homes. Mixing business, residential and light industrial property uses, pushing storefronts toward sidewalks and recognizing the road-by-road complexities of how the neighborhood developed “will allow Middlebury to come back into its own in a way that respects the historic structure,” Julien said.

The Middlebury Neighborhood Plan, which drew on surveys and door-knocking interviews of 200 residents, was funded by Huntington Bank’s Akron Community Revitalization Fund, which grows $2 million a year for a decade to sustain community-based development.

Nick Browning, Akron regional president for Huntington, said he’s “prepared” to help all eight neighborhoods targeted by the fund. He’s talking to North Hill. And may go next to West Hill or East Akron. Community development corporations (CDCs) in each have started grass-roots conversations around planning. The last in line are South Akron, Summit Lake and Sherbondy Hill, which share Middlebury’s dire statistics but lacks its business base and CDC.

“When I talked to Mayor [Dan] Horrigan about the places where we can best help, he said, ‘the neighborhoods,’ ” Browning said.

A fan of synergy and MKSK Studios, which also designed community-driven development plans this year for downtown and Kenmore, Browning followed the Knight Foundation. In Kenmore, North Hill and Middlebury, Knight helped residents reimagine their neighborhoods in a day of experimental pop-up stores and temporarily altered traffic patterns.

“I’m really happy that they’ve come up with plans for Kenmore, Middlebury and downtown that are actionable,” Kyle Kutuchief, Knight’s Akron program director, said of plans with doable projects and initiatives. “A lot of times we go through planning processes and end up with something that’s too much of a stretch.”

Reach Doug Livingston at 330-996-3792 or dlivingston@thebeaconjournal.com.